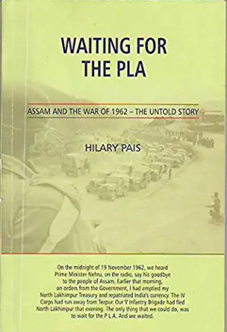 How shall I be known as? Can that be a problem?   In my case, it is. In the 62 years of my working life, I have gone through various versions of myself. Each one of those has been interesting and worth mention. As administrator in the State of Assam, as Head of the National Labour Institute, as Chair of the Industrial Committee on Plantations for the International Labour Organisation, as Member of Expert Committee on Consumer Price Index as Group Leader of the Committee on Minimum Wages for Rural Labour and so on. Every one of these has been a learning and rewarding experience. But none of them can really match the current version in which I find myself. I am the author of a book titled "Waiting for the PLA" which was released recently. For me, that is "Mission Accomplished".  Until recently, for me, that was "Mission Impossible". I will explain why.

What I was in Assam during the period covered in the book, has been given on the back cover. I do not want to repeat that. Material on those tough days of October and November 1962, in Tezpur and in North Lakhimpur was with me, kind of in-house, all the time. I was, so to say, a principal actor at the second place. What happened in the hills above and why that happened, however, became available only in March 2014 when Neville Maxwell released on the net, 145 pages of Part 1 of General Henderson – Brooks Review on the "Reverses suffered by the Indian Army" in the Kameng Division of the then NEFA. That gave me access to information on the decisions of the Government of India culminating in the two meetings chaired by Prime Minister Jawaharlal Nehru and one meeting chaired by Defence Minister Krishna Menon, that step by step, led to the war. As you will see in the General's report and which has been reproduced in the book, attempts to implement these decisions in undue haste, with military formations seriously under equipped and commanded by officers who proved unequal to the task, led to the disaster. That suited the Chinese PLA which was well equipped, well acclimatised and backed by good logistics. The Henderson – Brooks Review also gives the lie to the oft repeated statement that the PLA attacked in overwhelming numbers. At Dhola where the war started at 5 AM on 20 October 1962, Brig Dalvi's 7 Infantry Brigade was attacked by one PLA Regiment. A PLA Regiment is equivalent in numbers to an Indian Army Brigade. It took just two hours for the 7 Infantry Brigade to be demolished and the Brigade Commander taken prisoner. Contrary to what we have been informed by the powers that be, the numbers were even. The difference was that in the winter of October on the heights of Dhola, Dalvi's men were not given winter clothing. They were in summer uniforms. Dalvi's troops were not given artillery cover and Dalvi's troops were ordered by the Corps Commander, Lt General Kaul to guard bridges over the Namkachu, even as the river had become fordable.   The rest of the story during the action in November, was similar, with slight modifications here and there.

Amazon is carrying this book for sale. You can get into the relevant place by punching in the title of the book as it is displayed to your right side or you can do the same thing by punching in my name. The book is also available on Amazon in the Kindle format. That can be accessed internationally. It also makes it easy for you to read.

Reading the book, the facts about why the war occurred and how it went, will make you conclude that history that has been handed down to us so far, needs to be radically recast.


You can get back to me with your comments at paishilary@outlook.com.